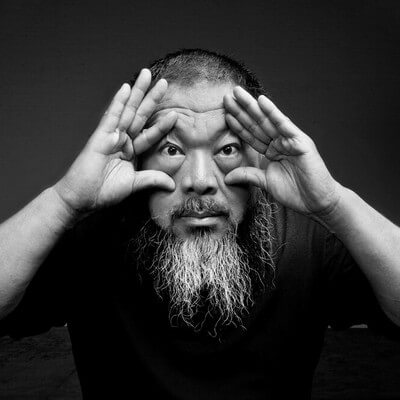 ‘If my art has any meaning, it is as a tool for freedom. If I see people victimised by authoritarianism, I am a soldier in defending their freedom. I can be as brutal as any animal to protect the essential value I love.’

Ai Weiwei is known as a conceptual artist, philosopher and political activist; whose main themes are human rights, economic exploitation and environmental pollution. He combines various art forms and traditional Chinese culture with a visual language that is now entirely his own. He makes extensive use of social media to reinforce his statements.

In 2013 he participated in the Amsterdam Sculpture Biennale, where the theme was ‘engagement’. The engagement is not something he is unfamiliar with. His father (Ai Qing) was a famous writer, poet and painter, who was exiled to a labour camp with his family in 1958.

In 1975 the family returned to Beijing; three years later Weiwei enrolled at the film academy. From 1981-1983 Ai Weiwei lived in New York and worked there as a carpenter and was drawn by design. His father’s illness brought him back to Beijing. Hans van Dijk, artist and collector, was one of the first to make contact with the Dutch art scene and Ai Weiwei.

Ai Weiwei exhibited for the first time in Gothenburg in 1995. Eight years later he founded the architectural firm FAKE. He became known for designing a house in Upstate New York and the Beijing National Stadium for the Olympic Games (2000). When schools collapsed during an earthquake in Sichuan in 2008, killing more than 5,000 pupils, Ai Weiwei was involved in exposing construction scandals and corruption and hiding them from the Chinese government.

He encountered more opposition when realising a new studio in Shanghai. The proper procedures would not have been followed. Ai organised a major demolition party. Due to house arrest, he could not attend. He was arrested and detained for tax evasion. Lawsuits followed and only four years later did Ai Weiwei get his passport back.