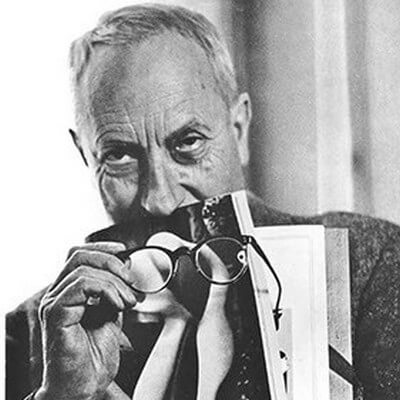 ‘Dada intended to destroy the irrational deceit of humanity and win back the natural and irrational order.’

Jean Arp (born as Hans Arp) was a German-French sculptor, jewellery-designer, painter and poet. He was one of the frontrunners of the Dada-Movement which promoted surrealism and abstract art. He didn’t shy away from coincidence and automatism. This is also applicable to how he wrote his poets.

Arp studied at several art institutions: in Strasbourg, Weimar and Paris. From 1909 he resided in Switzerland. In 1912 he participated in an exhibition of Der Blaue Reiter group in München, with a series of drawings. His work from this period until 1914 is very scarce because Arp destroyed it, so as to make it expressionist in its nature. In 1916 he founded the Dada-movement with some of his colleagues including Kurt Schwitters, Tristan Tzara, Theo and Nelly van Doesburg amongst others. That year he married Sophie Taeuber. In 1925 Arp participated in the first exhibition of surrealism in Paris.

What followed was Arp’s move to Meudon and Strassburg. In June 1926 the idea was formed to collaborate with Theo and Nelly van Doesburg to build a double house in Paris. They bought a plot of land, but the idea never materialised. The Arps took the entire plot of land and built their own home, which is now home to the Fondation Arp, musée et Jardin de sculpteurs.

In 1931 Arp bid farewell to surrealism and formed a different group: Abstraction-Création, who published the magazine Transition. Until the end of his life, Arp remained committed to writing essays and poetry. In 1942 he fled german occupancy; he resided in Zürich until the end of the war.

In 1949 Jean Arp held a solo exhibition in New York. A year later, he was invited to perform a relief work for a centre at Harvard University in Cambridge, Massachusetts. He was commissioned to paint a mural in the Unesco building in Paris. In 1954 Arp won the Grand Prize for Sculpture at the Venice Biennale.

In 1958 a retrospective exhibition took place at the MoMA (New York), followed four years later by one at the Musée National d’Art Moderne in Paris. Arp died in Switzerland in 1966.