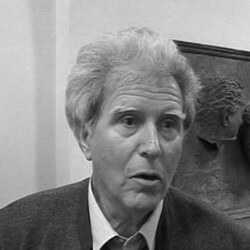 ‘The Greeks also portrayed the young kouros in motion. I don’t look at social, historical or anthropological differences. I only think of human ones.’

Roberto Barni is a sculptor, painter and graphic artist; he lives and works in Florence. He has been exhibiting since the early 1960s and in 1963 received a scholarship from the city of Florence. Together with the artists Umberto Buscioni and Gianni Ruffi and the architect Adolfo Natalini, he belonged to the artists’ group Scuola di Pistoia (1964-1969).

In 1965 he received an invitation for an avant-garde exhibition in Palermo. More group and solo exhibitions followed in Turin and Spoleto. Roberto Barni was invited on behalf of Italy to participate in the Venice Biennale editions 1984 and 1988. In 1986 and 1987 he had a studio in New York, where he had several exhibitions. He also participated in a group exhibition in Los Angeles and a solo exhibition at the Queens Museum.

Barni works together with the Italian architect Natalini on international architectural projects. They belong to the postmodernist movement. In the Netherlands, they worked on projects such as the ‘Passi d’Oro’ on the IJsselkade in Doesburg, the sculpture ‘Appuntamento con la Musica’ on the Waagplein in Groningen, the Muzenstraat in The Hague and ‘Albebri’ on the Boscotondo in Helmond.

With his work Continuo (1995/2000), Barni contributed to the sculpture park II Giardino di Daniel Spoerri which is run by the Swiss sculptor Daniel Spoerri in Seggiano in the Tuscany region.